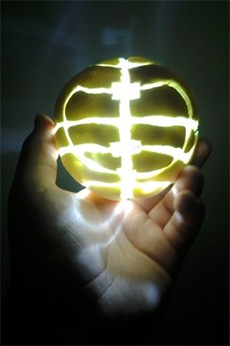 N. VANDERBILT - 05 JULY 2653:
Day 01 - I've been asked to assist Dr. Oke in the study of an ancient artifcate referred to as "the Orb of Babylon". This is my first day studying the object. My prelimary findings discovered nothing of great significance but upon further investigation, and unauthorized personal contact with the object (of which I retain full responsibility for any ramifications), I discovered that the object reacts to human contact. While holding the orb, it emitted a warm yellow light (pictured to the left). The glow was only sustained during contact. I've been asked to investigate the orb for any mechanical operations.

N. VANDERBILT - 08 JULY 2653:
Day 04 - The first day of investigations has been the only day that has revealed anything so far. I have not come in contact with the orb since that day and show no signs of any compromises. Upon the suggestion of a colleague, I have begun introducing the orb to various elements. Contact with heat did nothing to it, but submerging it in water revealed that it is vibrating at a very high frequency. I'm currently running audio tests to see if the vibrations register on an audible level undetectable to the human ear and, if so, what those emissions could mean.

N. VANDERBILT - 10 JULY 2653:
Day 06 - The audio tests have revealed that the orb is indeed emitting a sound that is too high for human ears to hear. It isn't a constant tone, but instead a sequance of six different notes in a repeating pattern. The pattern is long and complicated, averaging about 2 minutes in length before it starts over again. We are unsure of the notes significance.
ET